Written and published for the Journal, January 2017

HAVE YOU EVER taken a journey on a Bus Éireann coach and been told you can’t get off at your desired stop? “I’m afraid you’ll have to get off about 10 miles down the road. Sorry, but there’s nothing we can do.”

Have you ever had to phone Irish Rail 24 hours in advance to let them know you will be getting a DART or train, or be refused otherwise? Ever hailed a taxi only to be told, “sorry, can’t take you”. (Aside from a drunken night out).

These are some of the problems facing wheelchair users on a daily basis and nobody really bats an eyelid.

The coach fleet that Bus Éireann operates on Commuter and Expressway services is 63% wheelchair accessible, but a large percentage of the stops operating along these routes are not accessible. The responsibility for this issue has been bounced back and forth between Bus Éireann, the National Transport Authority and the councils for years.

Did you know that more than one third of people with a disability won’t travel for fear of something going wrong?

A mere 6% of our taxi fleet is wheelchair accessible, compared to more than 80% in the UK. It’s the only public door-to-door transport system we have in the country.

Irish Rail has huge accessibility issues that need addressing. For one, the platforms are at a totally different level to the trains. This affects parents with buggies, older people trying to climb those awkward steps, and wheelchair users who have to phone 24 hours in advance just to make sure there is a ramp put out.

Think of the difference it would make if these were level, like in Luas stations. Ever had to try to lift your buggy or bike onto the Luas? 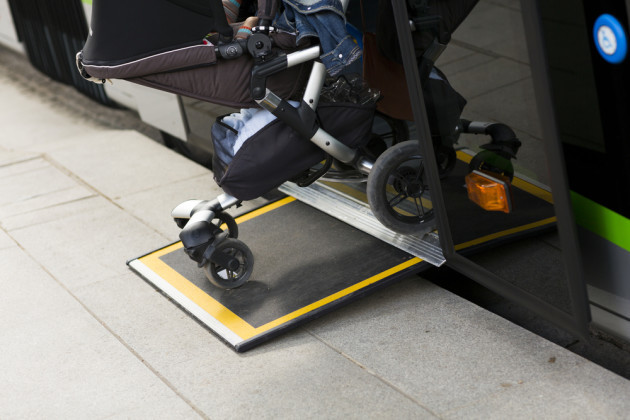 Accessibility affects all of us at some point in our lives

The problems that Bus Éireann are currently experiencing may actually provide a great opportunity to try to finally address many of these access issues that have blighted our public transport system for as long as it has existed. We need to bring it up to date, and quickly.

Imagine standing at the bus stop and not being able to see the number of the bus that is coming in the distance (many of you won’t have to imagine). Now imagine there is a visual and speaking indicator at the stop to let you know which bus is coming. It’s easily done.

That’s an improvement in accessibility that benefits not just someone with a visual or hearing impairment, but the general public overall. And that’s just one simple change.

Nothing comes for free and these companies have never really addressed access issues due to one excuse or another, mainly finances and willingness. Cork TD Jim Daly recently suggested that people who hold free travel passes should pay an annual €6 charge to fill the Bus Éireann deficit, but I don’t think this goes far enough and wouldn’t address any accessibility issues.

One of the main goals of the free travel pass is to give senior citizens and people with disabilities more freedom in travel, but what’s the point if you can’t use many of the public transport services anyway?

A fare on Dublin bus can be €3.30 for one journey – that’s one journey, one way – and how many people do this twice a day, five days a week? That’s €33 per week for argument’s sake. And remember, the free travel pass also gives you the opportunity to bring a companion for free.

What about a €24 annual fee for someone with a free travel pass? That’s €2 per month, much less than even one trip, one way on Dublin bus. This would create an annual pot of just over €31 million, which could be ringfenced to address these accessibility issues and limited to 5 years. A bailout for Bus Éireann in the first year could be tied to this commitment.

Improvements that could be funded

Think about the improvements that could be made in a relatively short amount of time. We could make every bus stop in Ireland fully accessible. Improve the current bus fleet. Improve accessibility at train stations and DART stations throughout the country. Provide staff with disability awareness training. Appoint “accessibility officers”. Even look at some sort of travel subsistence for people with disabilities when using taxis.

Obviously stringent conditions would need to be put in place around this to make sure it was used for the intended purpose, but wouldn’t €24 a year be a small price to pay for these significant improvements? And yes, the Government should be financing this themselves, but they’re not.

In a time of isolationism and with the current rhetoric coming from America (I’m looking at you Trump), wouldn’t this send a really strong message? A fully inclusive public transport system (in a much quicker timeframe than any current plans) would reiterate our national message “céad míle fáilte”- 100,000 welcomes to all – going some way to creating an Ireland where everyone is really welcome.

Stephen Cluskey is co-founder of award-winning Mobility Mojo, a Nissan Generation Next Ambassador and a disability advocate.